This presentation was given as a scheduled talk at PyCon UK 2007. The material presented covered the following subjects:

The following materials are available: 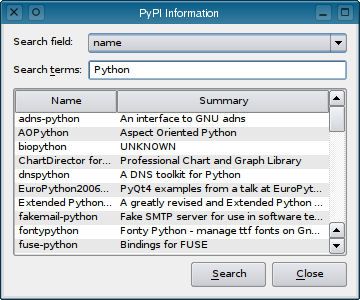 The PyPI Information example shows how a graphical user interface created with Qt Designer can be accessed and used in a PyQt4 application.

The Equation Viewer example uses a more realistic user interface, with menus, actions and toolbar buttons, and shows how these elements can be connected to features written in Python.

The Logo Maker example contains two custom widgets: the color button is described in the slides, but the logo widget itself can also be used from within Qt Designer.